"An ode to a too-little-discussed musician and an excellent introduction to his amazing musical talent."
Kirkus *starred review*

"An inspiring story of one man's commitment to lifting up himself and those around him with his music.
An American treasure who shouldn't go unsung."
Booklist

"Lewis's expressive watercolors depict the subject's humble country beginnings as well as the joy he felt when he sang and played.
A beautiful, timely tribute to a little-known musician and space venture."
School Library Journal *starred review*

"The inclusion of Johnson's song 'Dark Was the Night' on a recording aboard NASA's Voyager frames this biography, handled with artistry by Golio and illustrated by Lewis in dazzling watercolors.
The volume movingly commemorates Johnson and his music, which 'shined a light in the darkness and finally touched the stars'."
Publishers Weekly *starred review*

The magical story of how a poor blind boy from rural Texas became a legendary musician
--revered by Eric Clapton, Lucinda Williams, Jimmy Paige, and Jack White--
then died in poverty and was forgotten for decades, only to have his haunting song,
"Dark Was the Night," included on Voyager I's Golden Record and shot into the depths of space!
Voyager has now traveled beyond our solar system, but Willie's legacy still inspires here on Earth.

An amazing story of where a human life can lead... 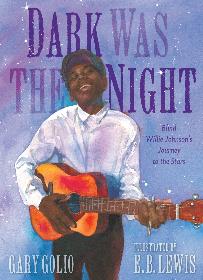